Zig when the world zags. I heard that so many times while studying advertising, and then again when I studied fashion design, the words seem to have drilled themselves into the very marrow of my bones. I always seem to be going long when skirts go short; traveling south while the flocks are flying north; sleeping when I rest of the world is awake; spawning when the schools are going with the flow. When it comes to travel, that has made for some very interesting adventures, I have been able to hang out with locals when the rest of the travelers have gone home.

I had wanted to leave for Baja much earlier in the year, but with this delay and that fire to extinguish, I didn’t get out of town until the very end of February. Driving south, I was greeted by a constant flow of big RV’s with USA and Canadian license plates heading north. Each night, I would meet new snowbirds who were heading home. I heard the same thing over and over, “we want to get home before Semana Santa.”

Semana Santa (Holy Week) is like Spring Break for the entire population. Celebrated throughout Mexico and Central America, it might even be a bigger fiesta than Christmas. In Mexico, every school child has vacation the same two weeks, the week before Easter and the week following. The exodus from the cities begins with the moms, grandmas, and young children the Thursday or Friday before Palm Sunday. They head to the beach and stake a claim to a piece of real estate. Over the following week, pick-up trucks arrive, laden with all the comforts of home: plastic lawn chairs and tables, pop-up tents, pop-tents, barbecue grills, blow-up mattresses and all the bedding, mosquito nets, pots and pans and plate and cups; jugs of water, boogie boards, bicycles, masks, snorkels, fins, jet skis, rubber dinghys, and cooler after cooler filled with ice and ice cold beer. Each day the encampments grow larger as more people arrive, until finally, the beach is one seething mass of people and wall-to-wall makeshift homes. The party seems to be never-ending. The music rises with the sun and sets when the last borracho (drunk) falls asleep. When the sun rises, it starts all over again.

I was intrigued, yet a little concerned. In my experience, camping solo in the midst of a pack of Mexicans is a very lonely thing. As Semana Santa approached, I was staying at my sleepy, backwater, Playa Escondida. The beach next door, Playa Los Cocos, was slowing being infiltrated by Mexican families, and each day Michael would report on the growth of the communities at the other beaches. He would also complain bitterly the “his solitude” was being ruined by those inconsiderate people and their loud music and voices. “Interesting,” I thought, a gringo in Mexico being encroached upon by the Mexicans.

By Friday everyone else had pulled up stake and headed out, so I figured it was time I did the same. Not exactly sure where to go, I decided a city would be my best bet and all the locals were headed to the beach. By Monday, my friends were all crossing the border into the United States. I was enjoying a pleasant evening stroll on the Loreto Malecón, where preparations were under way for the big fiesta. 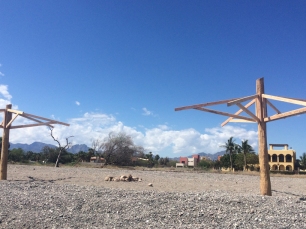 Since then, I have discussed the Semana Santa phenomenon with many locals. They think that gringos are a very sad and lonely bunch of people. They arrive in these big rigs with never more than two people. They park as far away from each other as possible. They put up their awning and two chairs, but rarely are the two chairs occupied at the same time. They sit in the shade with a book in one hand and a drink in the other, and rarely do they talk to their neighbors. “Their life seems so boring,” said my friend Jose. 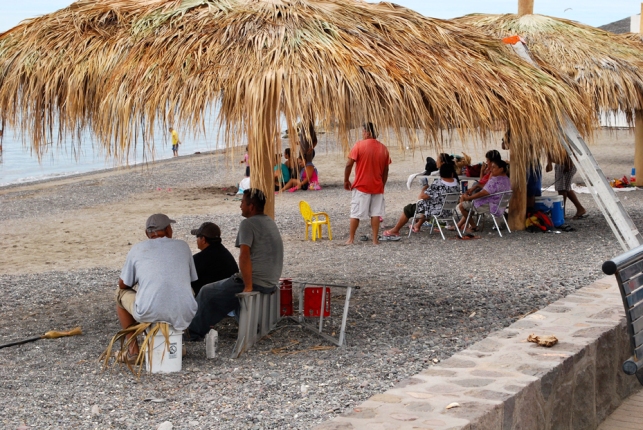 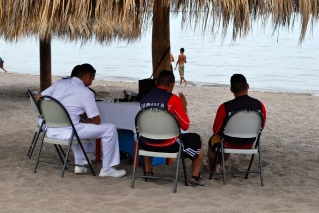