As I waited for my dad at the finish line of the Seaside Marathon, the wind was blowing sideways, the rain had soaked through my every layer of clothing, and the cold had penetrated to the center of every bone in my body.  It was just a typical day on the Oregon coast, miserable.

My dad crossed the line and fell into my arms. It was his seventh marathon that year. While I was swathed in multiple layers, he was wearing nothing but a singlet, dolphin shorts, and his running shoes. As I guided him to the car his shivering grew worse than a 1,000 fingers massage bed.  I opened the door to the van and sat him on the floor, wrapping him in the travel blanket and putting a cup of coffee from the thermos into his hands. Neither could he hold the cup nor speak through his chattering teeth.  I’m sure he was on the podium that day, he always was, but the sight of my shattered dad scarred me.  Never, I thought, would I put myself through the agony of a marathon.  That would just be silly.

Truth be told, I never liked running much. My brother Stephen was something of a cross-country running champion.  I followed in just about every one of his footsteps, but the running shoes were not for me.  I did ran cross-country my first two years of high school, all my friends were doing it and my mom was the coach.  In reality, it was more convenient to go to practice and races than the alternative, take the bus home from school.  I never liked it and I was never very good.  I suppose those two go hand-in-hand.
I ran briefly in college.  I was at the University in Oregon in Eugene, what else does one do in TrackTown USA?  I only ran because it was the beginning of the triathlon craze and I fancied myself a triathlete.  In truth, I was a great swimmer and a decent cyclist, but I was still a lousy runner. 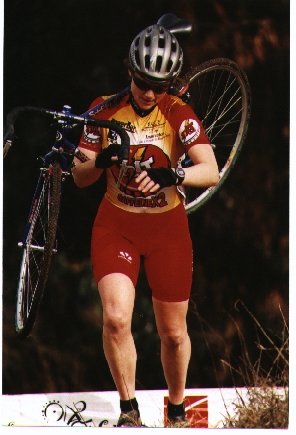 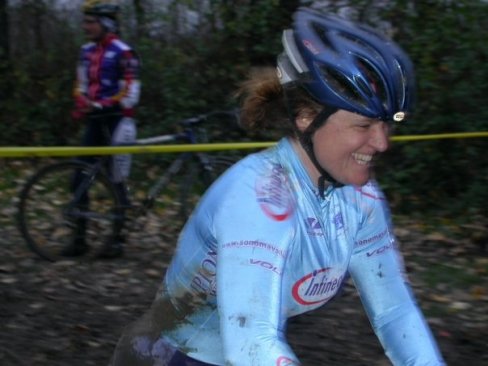 Ten years later I discovered my true love, cyclocross, a sport that requires (ugh) running.  This time around it was different.  I was running with a goal, I seemed to have a natural talent for cyclocross, and if running was required then so be it.  My Sweet Ophelia changed my view on running.  When I pulled on my running shoes and hit the trails of Golden Gate Park her joy was infectious.  It wasn’t long before I began to really love our runs.

After a while, the riding took a back seat to running.  My business was consuming too much of my time and I could get a good run in in the same amount of time as a good morning dog walk.  It was a no brainer.  Then I moved to Oakland and the trail options became endless.  I was no longer constrained by the boundaries of Golden Gate Park.  This was a good thing, because my Sweet Ophelia had died and my Luna Diablita was not nearly as well behaved, she needed the miles and miles to roam.  As I continued running, three miles became five, five became ten, and ten became 15 miles and more.

One day it occurred to me, all this training, why don’t I channel it towards racing?  The competitive spirit is strong within me.  Seeking inspiration, I spoke to my friend Sara Brown who had been running crazy long trail races for years.  Together we hatched a plan to do a race together.  I found an event, the Woodside Trail Run, which worked perfectly for our schedules.  They offered 10k (6.2 miles), 17k (10.5 miles), and 35k (21.75 miles) races.  Any normal person would choose the 10k or 17k as their first race.  That seemed silly to me.  If I was going to pay the money to go race, I wanted to get my moneys worth!  35k or bust!

As race day approached, I mentioned to Sara that the same organization was putting on a marathon just two weeks later, the Skyline to the Sea Marathon. Sara casually told me, “you should do it.  The 35k is the perfect pre-race run and the two weeks are the perfect taper time.  How hard could it be?  It is 6,000 feet of descending after all.”

“If running a marathon is just that simple, and I’m already so close, why not just run the damn thing?  Oh, because I never had a desire to run a marathon.  But this would be another notch on you bedpost.  But marathons are just silly.  But you could do it…” The conversation in my head began to feel like Gilligan in the cross-dressing episode, “I won’t do it and you can’t make me.”

Oh, what the hell – I went online to sign up.  What good luck!  The race was full.  I put my name on the waiting list and figured I had saved myself from a silly whim. Moments later I received a phone call from the race organizer, “are you The Sheila Moon?”

Most of the time, I love being The Sheila Moon.  Moments like these that anonymity wouldn’t be such a bad thing.  Now I was committed.  I was going to be doing my first marathon, something I never had any desire to do. With 6,000 feet of descending, how bad could it be?  Silly me, I didn’t look very closely at the course profile and the 3,000 feet of climbing mixed in with all that beautiful downhill.

The Woodside 35k was gnarly and brutal and we had a blast.  It was pouring down rain and the trails resembled streams more than paths. At the starting gun I grabbed Sara and we made a mad dash for the singletrack – getting the hole shot.  We laughed and sang and made up crazy schemes to make sure we ate and drank.  We zoomed down the descents and slogged up the climbs.  It was like being back on the cyclocross circuit of my first season, the El Niño year.  Much like cyclocross, there were many moments that I wanted to quit, but once the race was over I was already thinking about my next race – after they awarded me my age group, third place ribbon that is.

Two weeks later the day of my silly whim arrived.  The Skyline to the Sea Marathon was an entirely new challenge.  I had to get up at a god-awful early hour and drive to the finish line at Rancho del Oso.  From there, I caught the race bus to the start at Saratoga Gap.  A couple of new friends and I took the hole shot, once again, racing down the first hill at a blistering pace and slowing to a crawl on the first climb.  There were rivers to forge and logs to hurdle.  I pretended like I was on my mountain bike, zooming down the hill and around hairpin corners.  I might have accompanied myself with sound effects.  Everything was grand until mile 22 when I hit the paths of Rancho del Oso. I was done.  My tank was empty and my legs were noodles.  As I dropped out of the singletrack and onto the paved road I was greeted by a family of four riding bicycles.  I nearly knocked one of the kids over and stole his bike for the last four miles.  “This is just silly,” I thought to myself.  “A bike would be so much easier!”

I slogged through the last four miles, crossed the finish line, and collapsed onto the grass.  That was miserable.  Unlike cyclocross, visions of my next race were not dancing in my head, even after they awarded me my age group, third place ribbon.  I took the back roads home, wandering through Pescadero so I could stop at the Arcangeli Market and get a loaf of their amazing artichoke bread.  My stomach was very touchy and the only food I could eat was white.  Somewhere between Pescadero and San Gregorio Beach I decided my clothing was horribly uncomfortable.  I stopped the car, got naked by the side of the road, squatted to pee, put on fresh clothes, then climbed back behind the wheel.  For the next week I had to use the handicapped grab rail to lower myself onto the toilet seat, wishing I had a rail at home.

I wish I had followed my own advice.

I’m lying.I’m super proud of myself that I ran a marathon, a trail marathon at that! 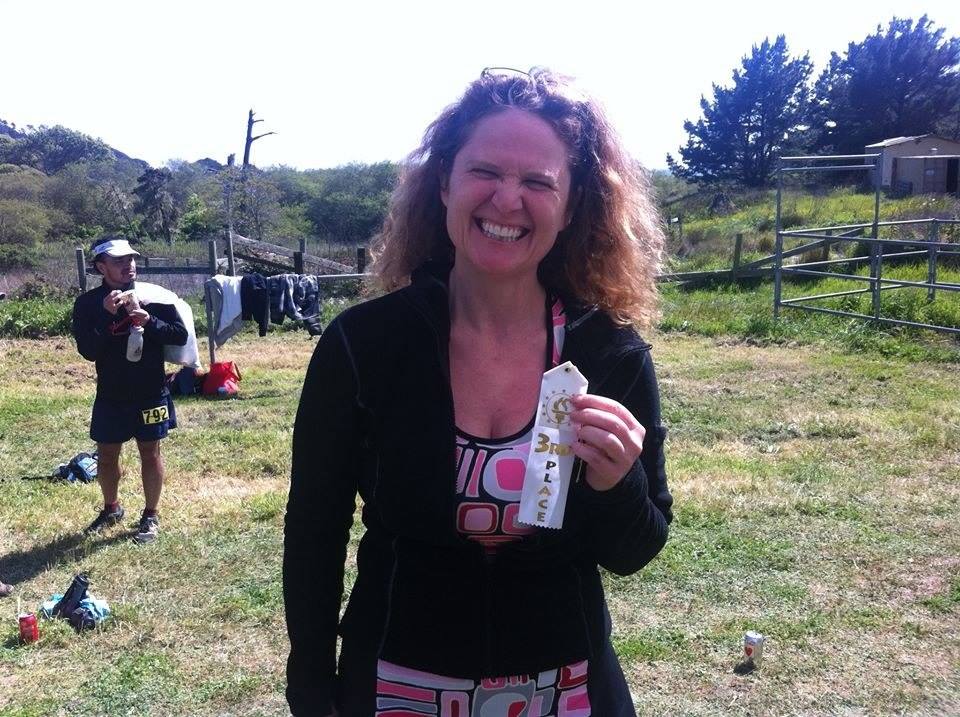 Five years down the road, I’m once again training and planning my strategy for a gnarly race, the Don Diablo 35k Trail Run, another 21.75 miles of singletrack  with nearly 5,500 feet of climbing and more than 6,000 feet of descending.  Why, because it is there?  No. Because it will be the first anniversary of kicking Lyme disease to the curb, giving that pinche garrapata the middle finger.  Is it easy? Hell no.  Some days I want to curl up under a cactus on let the vultures rip out my entrails and shred the flesh from my bones. Most days it is just good to be alive and able to do the insane.  So I lace up my shoes, load my pups into the vehicle, and hit the trails, again.