I was so thrilled to be surrounded by green and water and a cool breeze that I decided that I to stay at Los Petates in San Ignacio for an entire week. In general, I stay in one place for two to four days then I move along. The world is a very big place and there is so little time to see it all. But there is one lesson that I am beginning to grasp ~ sometimes, if you stay in one place for more than one hot minute, adventures and people come looking for you.

I quickly settled into a simple routine. Each morning Manuel and I would ride our janky old Fuji bikes about 20 miles, chattering away in Spanish. What a great deal, a nice bit of exercise and free daily Spanish lessons. Following our ride I would do some writing, study a little Spanish grammar, and cook some food. Sometimes I would wander into town when it cooled off, sometimes I would just hang out and talk to the people in camp. In the evenings I would relax with a good book and the symphony of frogs and birds.

My second night at Los Petates, I made a new friend. Carl is a longshoreman from Southern California. He owns a home in Todos Santos, where he lives much of the time, but he was driving back to the states to take care of some business. He rolled up for a swim and a chat with Manuel. We got to talking and he decided it would be a good place to stay the night. We spent the whole afternoon, and much of the evening, talking politics and “the good old days”. Coming of age in the golden age of disco is much less interesting than the era of Sex, Drugs, and Rock and Roll, the sixties in California. Carl’s misadventures were much more entertaining than mine.

The next day I took a bone-jarring drive out to Laguna San Ignacio. The laguna is another one of the prime baby whale viewing destinations. I had already had my baby whale experience so the adventure left me jarred. There is not much to see and not enough time had transpired since my last ugly driving adventure. I should have stayed “home.” 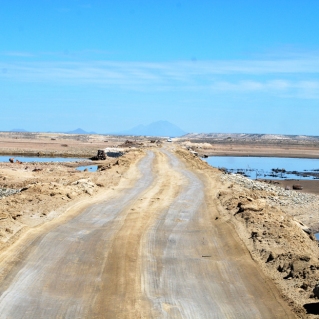 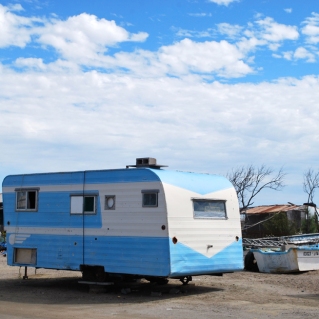 During that week, the campground was full almost every night. I jokingly told Manuel that I was his good luck charm. In reality, I probably was. Most people who drove in didn’t speak Spanish, but they did want to know what the nightly fee was and if there was space available. Having an English speaking contact on site, especially one as content as I was, encouraged people to hang around for a night or two.

One day, I was called upon to play translator between the Canadians who wanted the best space for the night, which to their misfortune was occupied by a Mexican family enjoying a Sunday afternoon bbq (Luna was very interested in the carne that was sizzling on the grill). I was able to broker a deal, but in hindsight I might not have been the most qualified person for the job.

I had mentioned to Manuel that I was interested in touring some cave paintings with him, unfortunately, being only one person, it would be a bit too expensive for my budget. That evening, after I had retired, I heard a tentative knock on my door. Manuel had returned to the campground to ask if I would like to join him and a group the following morning for a tour of Cueva del Raton in the Sierra de San Francisco. Luna was also welcome. Of course! He arrived at 7:00 a.m. sharp for our big adventure 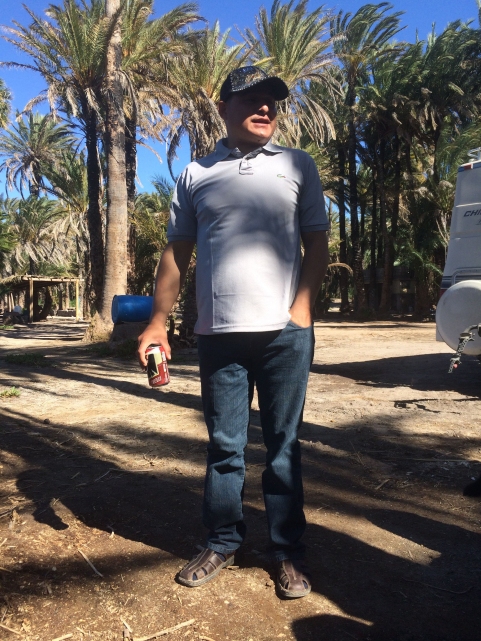 I returned from an amazing day touring the Sierra de San Francisco, to find two men with an eight pack of Tecate Light hanging around the camp. They were hoping to rent the paddleboat for the afternoon. Manuel rented them the boat then left. The guys climbed into the boat with their eight-pack and paddled around until they had one beer left. That was when they pulled up alongside my space and offered me a beer and a ride in the paddleboat. They told me they were policia, I imagine that was to allay my fears about going for a ride with two strange men. Not that I was afraid. Both of them were my height, 5’6”, average for an American woman, but certainly short by American policeman standards. Andreas was the more confident of two. He had a healthy beer belly protruding from his small frame, a Bride of Frankenstein streak of grey in his jet-black hair, and the most gorgeous, gentle, brown eyes. Alejandro had a smaller beer belly, a short, footballers neck, and a sweet shyness about him. I hopped in the boat and off we went. Luna swam next to the boat, keeping a close eye on her mama and the policia.

The three of us spent the rest of the afternoon hanging out, chatting, drinking beer, and eating chips. They were state policia from La Paz, here on a two-week rotation at the San Ignacio checkpoint. They told me stories of the recent outbreak of violence between competing drug cartels and the policia there. They told me about their friend who had been shot 12 times. He survived but will spend the rest of his life in a wheelchair. Andreas then showed me photos of dead and tortured bodies. Included in those photos was one of him in full uniform. This pudgy boy with the beautiful eyes was one of the policia who had instilled such fear in me. It put a face to the faceless enforcer, and it gave me a deeper look at what these boys face. Boys I say because they were both in their late twenties.

They left in the early evening so they could have a bite to eat and a nap before going on duty at 9:00 p.m. They promised to return the following evening and take me to the one disco in San Ignacio, the disco that was only open on Saturday night.

Saturday evening rolled around, but my policia friends did not. As I was enjoying the evening sunset symphony, my new neighbor from Utah joined me for a glass of wine. We chatted for a while, until Manuel hailed my attention from behind my caravan with surprising urgency. He mistakenly thought that my Utah friend were the policia, returned for an evening visit. He pulled me aside to warn me of the ways of the Mexican male. Being the stinker that I am, I “didn’t quite understand” what he was trying to say, forcing him to get creative with his language. That was until he realized I was chatting with a gringo and not a policia, and therefore he needn’t be concerned for my safety nor my virtue. I have always told people that I feel safe in Latin America because many men feel the need to protect a single woman. Maybe there is truth in that statement.