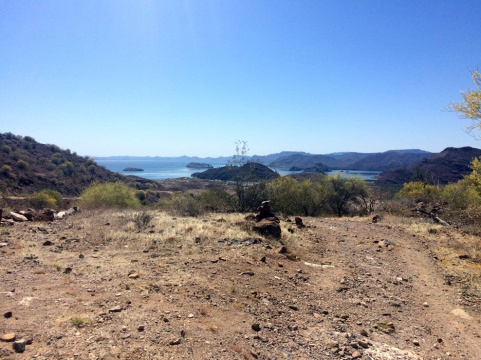 Saturday seemed like a fine day for a bike ride. Just before 9:00 a.m. I headed out on my mountain bike. It felt really good to be back in a saddle that wasn’t as wide as a horse. I headed up the road to Posada Concepcion, then I turned west on the gravel road and started up the hill. George told me there was a nice five-mile loop that was easy to find. About one mile up the hill I encountered a snake crossing my path. It was, indeed, a rattlesnake. I am not afraid of many things, but where snakes are concerned I am like a female Indiana Jones. Until I was seven or eight years old, I believed snakes were fine playthings. My brothers and I would gather up the garter snakes in the yard and play with them in a wheelbarrow full of dirt. One fateful day, I learned the proper snake etiquette for girls from my two little girlfriends. When one encounters a snake, one screams a high-pitched scream and runs the other direction. I’ve had a healthy, and rather embarrassing, fear of the creatures ever since.

So back to this rattlesnake crossing my path. I looked at him. He looked at me. He coiled himself up like a spring and stuck his tongue out at me. I placed my bike between him and me and took two stealthy steps backward. I tried to sneak around him. He angrily shook his rattle at me. At his warning, I stood stock still and spoke to him in my most soothing voice, trying to convince him to move along, back into the bushes, it was too warm in the sun. He finally complied, and with a final shake of his rattle, he slithered back into the bushes.

The rest of the ride, I kept both eyes on the lookout for more rattlers. I used my third eye to negotiate the trail. I stuck to the gnarliest track in the center of the trail, for fear of sneak snake attacks. Using my third eye turned out to work just fine, since I had to walk much of the trail, strewn as it was with river rock and deep creek ravines. Who would have thought that such a bad-ass cyclo-crosser was such a chicken-pollo on the mountain bike?

Once I descended the other side of the mountain, I found what I thought was the trail and followed that. It might have been a horse track, maybe mule trail, possible just a coyote trail or a dry creek bed., but it wasn’t a bike path. The further I pressed on, the more cactus bombs stuck to my shorts, my socks, my gloved fingers, and my tires. I was thankful for my full-fingered gloves with extra fortification on the index finger, those little fuckers were both sharp and tenacious. After four and one-half miles of that nonsense, I finally turned around. By that time it was too late, both my tires were flat.

Walking the bike when I had to, and riding the rims when I could, I made my way back toward home. The entire descent I was in fear of once again encountering Señor Rattlesnake. I was relieved that he had gone home for the day.

Seven miles and two and one-half hours later, I rolled into Posada Concepcion. Walking along the main street, I beheld a sight that made my heart sing ~ a sweet boy with a flat of freshly picked, deep red, sun-warm strawberries! 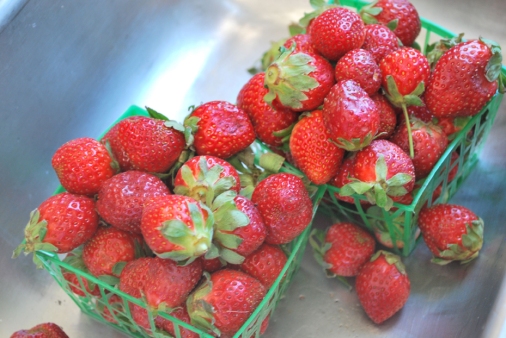 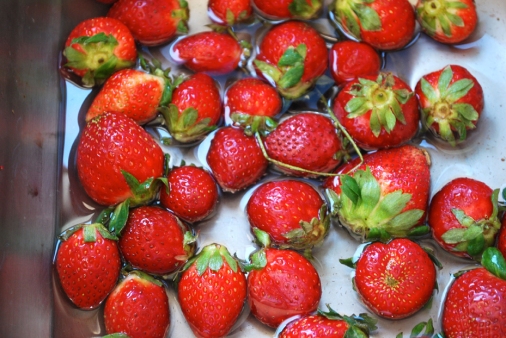 He invited me to sit down in the shade and join him for a handful of the delicious morsels. They were the closest thing to heaven, since my last ecstatic experience. We arranged a Special Strawberry Delivery. I walked my bike the last half-mile to my Playa Escondida home, and he arrived shortly thereafter. I bought three baskets of those beautiful berries, then I relaxed in the palapa with the Strawberry Boy, chatting about this, that, and the other.

As he got up to leave, he leaned over and placed a gentle, strawberry sweet kiss upon my lips.