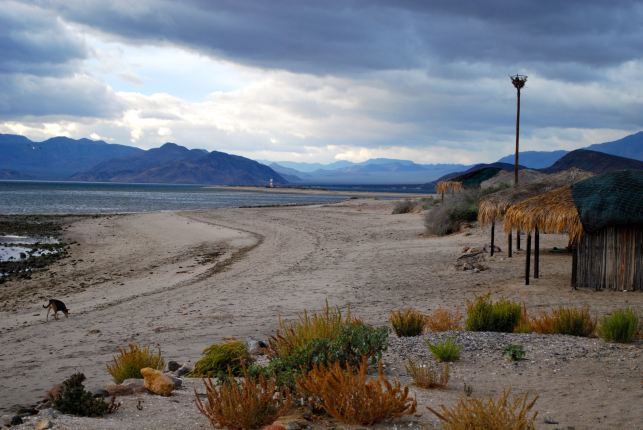 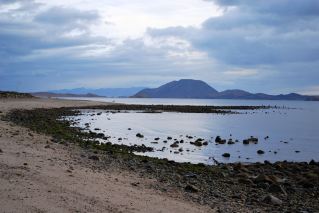 My uncle Tim once told me, “I’d rather go catching than go fishing.” I try to apply this to many aspects of my life. Shopping? Bah humbug. I’d rather just go “buying.” Try?  Not in my vocabulary.  I “do.”  So bright and early, before the crack of dawn, Denise and Steve Garro and myself are up and ready to head out on the Bahia de Los Angeles with our guide, Marco. We are “Going Catching!”

The wind was blowing pretty good and the storm clouds seemed to be approaching from every direction. Our small sucker hole was rapidly diminishing. Marco suggested we wait until the next day. While we were at it, he also recommended that we pray for good weather. The boys in the group were convinced that the storm was going to hit hard, and if it did hit hard it would stay for three days. Pessimists.

With our hopes dashed, we tucked into some more coffee and gingerbread, followed by a little more sleep, and breakfast number two. The three of us spend our “rain day” walking the beaching, eating, drinking Mexican cerveza, and telling tall tales. We all feared the worst, yet hoped for the best. The weather gods had sent some really spectacular weather. Boxed in on all four sides, the storm seemed to be hitting us from every direction with dramatic cloud formations, strong winds, and intermittent bursts of rain. When I crawled into bed that night, the winds were once again buffeting mi Casita Lunita, and the rain was drumming softly on the roof. Even I was beginning to lose faith. 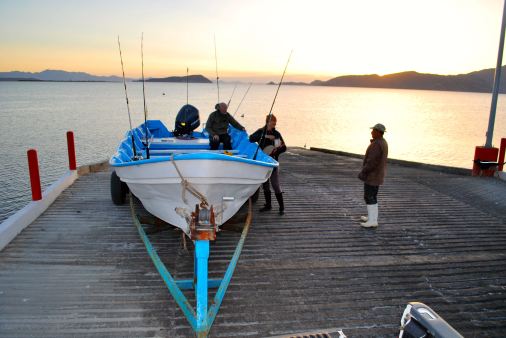 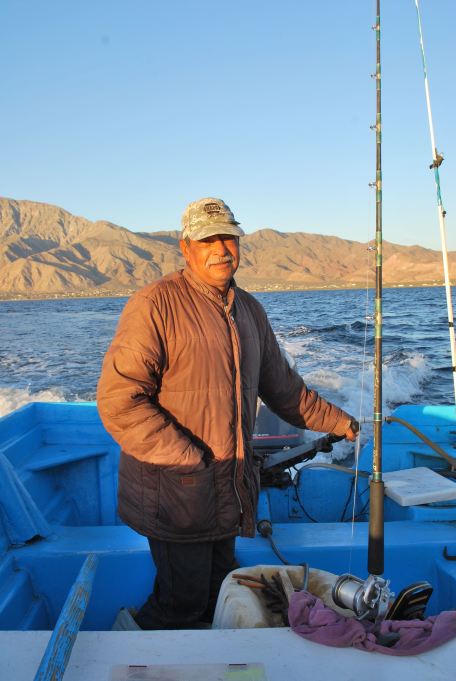 The next morning, Denise came knocking at my door just after 5:30.

“Are you ready to go? Marco is here and ready to roll.”

Marco made the executive decision to take advantage of the sucker hole and off we went. Truth be told, this morning was nothing like the day before. The sea was dead calm. Yesterday’s clouds had transformed into fluffy tufts of cotton candy, and the sky was glowing a gentle coral.

I threw my few things into my backpack, grabbed a sandwich, filled my coffee cup, and away we went. Steve was perched on his seat in the boat, looking like a precocious, bright-eyed five year old, ready for a new adventure. Luna and I jumped into the back of the pick up truck. I felt like I was 10 years old, heading down to the Dairy Queen with my Grandpa and my slew of cousins. Denise and Osa were cheated, they had to sit in the boring old cab of the truck with Marco. We rolled through town to the Marina. Marco dropped the boat into the water while I dropped my drawers behind a tree for one last pee-pee. We loaded up the people and the dogs, then hit the dead calm sea. 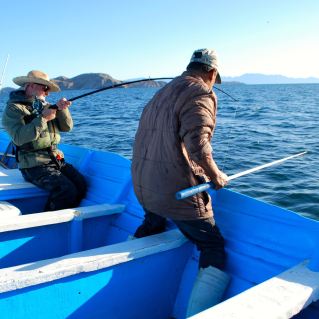 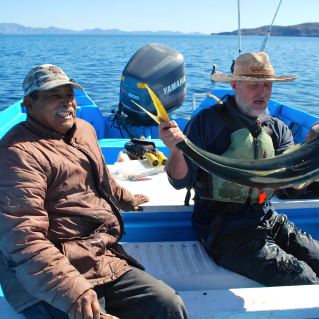 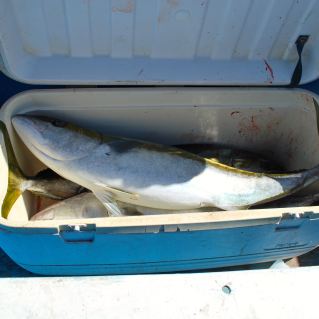 It was a perfect morning on the bay, but it seemed that the fish were still asleep. All of a sudden, Marco shoved his pole in my hand and shouted something in unintelligible Spanish. There was a fish on the line. I successfully lost it. Next, Steve hooked a fish and fought that sucker all the way to the boat, and it put up a good fight. It was a gorgeous 45-pound yellowtail. The fish were finally starting to wake up.

As soon as we had the fish landed, slapped some celebratory high-fives, and took proud papa photos, it was back to business. I dropped my line and began reeling it in, fast, as I had been instructed. I felt resistance and complained that I had snagged an old shoe or something. When the line started zipping from my reel and the rod was nearly pulled out of my hands, I realized that the old shoe was not an old shoe at all. I had hooked my first fish. Thankfully, Denise was there to help me. Her strong arm, coupled with coaching from both Steve and Marco, a good 15-minute fight, and I landed my first fish, 45-pounds of beautiful yellowtail.

The morning continued, following the same routine. We would watch for birds flocking around a turbulent spot in the water. Marco would point the boat and zoom in that direction, hoping to beat the other fishermen to the spot. We would drop our lines until they hit bottom, then reel them up as quickly as possible. When Marco gave the word we would reel in our lines and off we went, following the birds in pursuit of the elusive yellowtail. By 9:30 a.m. we had caught four nice fish that were threatening to flop right out of the cooler, our arms were battered by our efforts, and the storm looked to be brewing once again. We decided to call it a day and head for home with our treasures. 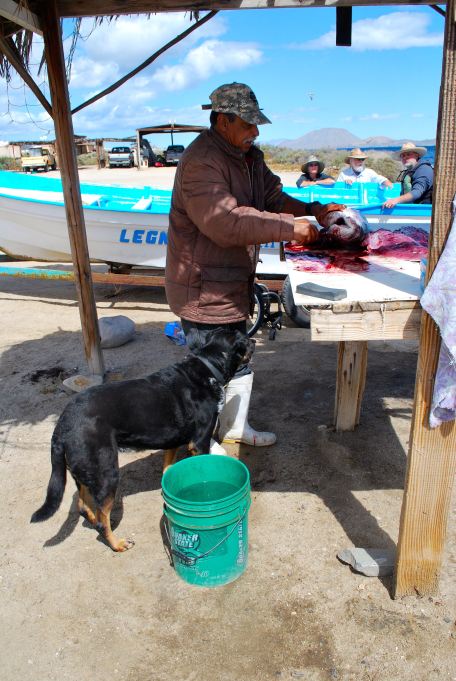 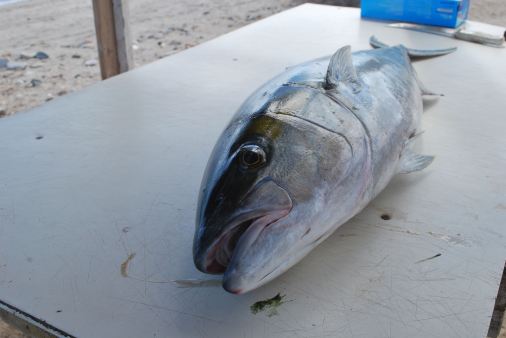 We pulled the boat out of the water as our sucker hole closed around us. The wind and the waves were both picking up. The cotton candy clouds were turning into gray, bottom-heavy water balloons. These clouds were descending upon us from every direction. We had just enough time to get back to camp and to watch Marco gut and clean our fish, when the rain came hammering down. We sat on Steve and Denise’s front porch, under a roof that barely contained the rain, and cooked up a feast of fresh yellowtail – starting with smoked jowls.

With my belly full of fish, my head swimming in Mexican cerveza, and the wind whipping the torrential rain sideways, I took myself and my Luna to bed for a nice cup of mint tea and a bit of reading through my eyelids. Denise knocked on my door at 5:30 once again, 5:30 p.m. that is, and urged me to come out and see the sunset, “it is incredible.”

She was not mistaken. 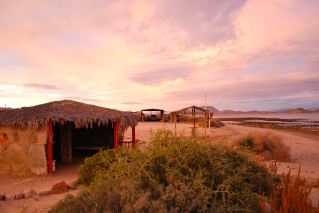 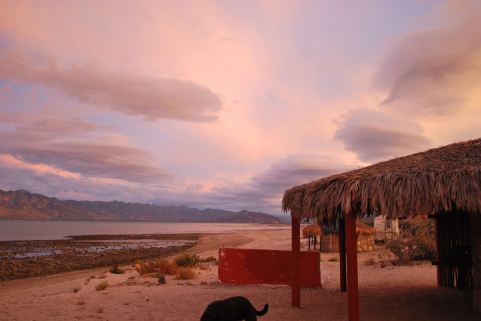