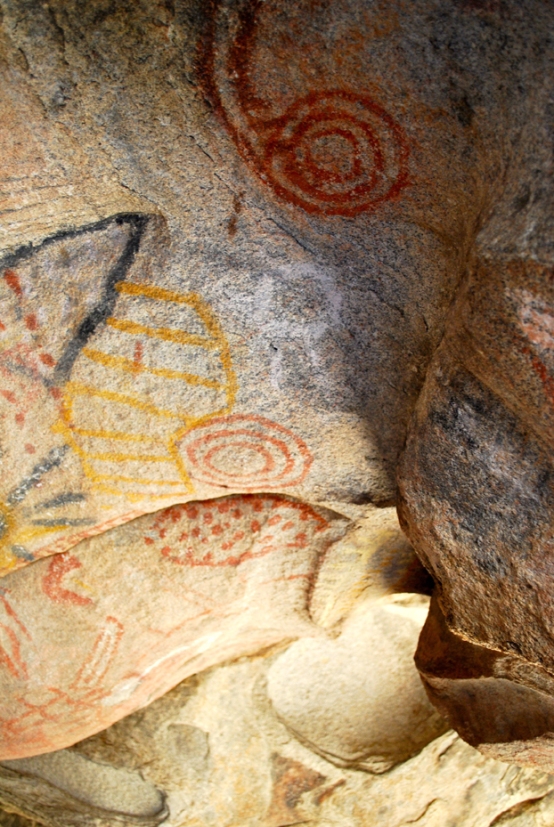 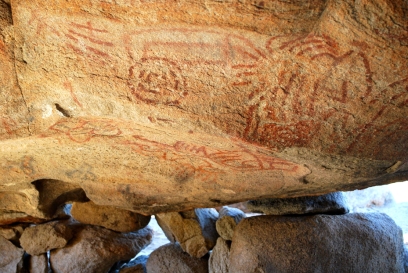 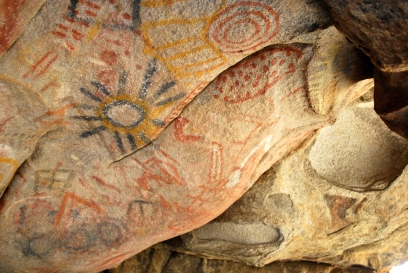 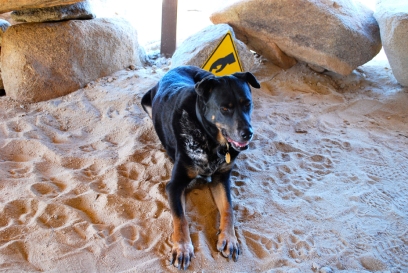 Baja California is littered, quite literally, with ancient murals. It is estimated that there are more than 400 mural locations, possibly dating from as far back as 3000 BC. The murals are virtually unknown outside of Mexico, but they rival those of Lascaux, France and Altamira, Spain. Not much is known about the paintings or the painters. While it is generally believed that it was the work of the Cochimí Indians, it is certain that the painters were Paleolithic hunters and gathers who followed the migration of the birds and the beasts throughout Baja California. Interestingly, it is believed that the murals were painted as both ritual and artistic expressions. The painters constructed scaffolding so they could paint on the ceilings of caves and they used pigment from locally available sources. When the missionaries arrived, they were told by the Cochimí Indians that the murals were painted by giants because many were at least 10 meters above the cave floor. I’m not sure if the missionaries believed that tall tale.

The paintings were first “discovered” by the Spanish missionaries in the 18th and 19th centuries. The first person to systematically study the murals was Frenchman Leon Diguet, an employee of the El Boleo copper mine in Santa Rosalia. Erle Stanley Gardner, of Perry Mason fame, developed and intense fascination for the murals and spent many hours and dollars researching and writing about the subject. Harry Crosby picked up his mantel in 1972 and has written the most authoritative book on the murals, The Cave Paintings of Baja California. Since his time, the Baja Great Mural Region has been designated a UNESCO Heritage Site, allowing researchers to apply for UNESCO grants to study the murals more thoroughly. Access to the cave paintings has four classification levels, ranging from access to all with or without a guide, to access for academic research only, which requires approval by INAH (Instituto de Antropología e Historia) or SEMARNAT (Secretaría de Medio Ambiente y Recursos Naturales).

I had heard there was a site in the Cataviña Boulder Field. I was concerned about finding the small cave, as it is about a half mile off the road. I needn’t have worried. There was a conspicuous “Sitio Arqueológico” sign on the side of the road, a large parking lot with pit toilets, and a walkway lined with white painted rocks and interpretative signs along the way. The paintings were in a low-ceilinged cave, which was little more than an alcove under a rock overhang. It is rather astonishing to sit on the sandy floor of a cave and meditate on art that was created thousands of years ago. 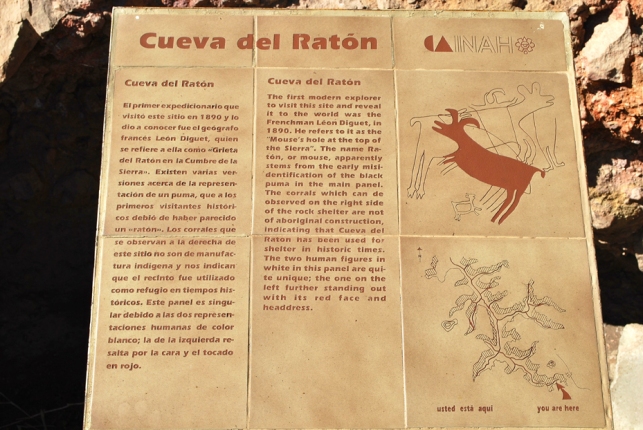 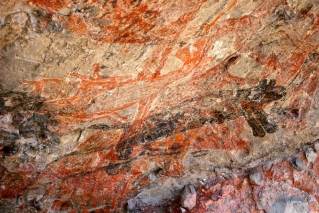 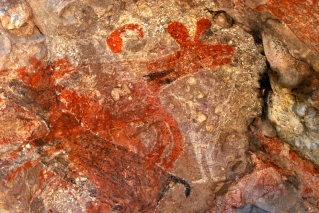 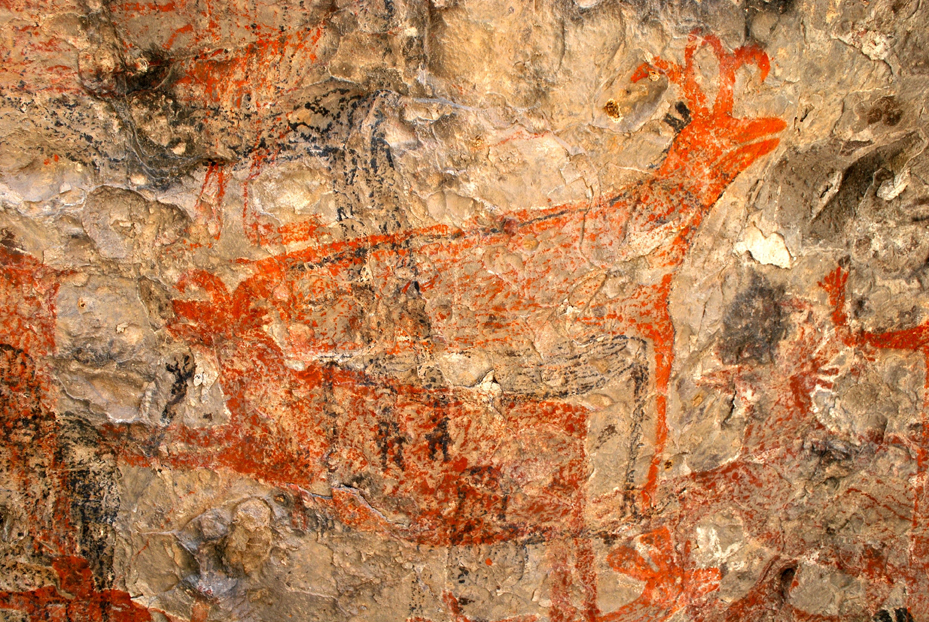 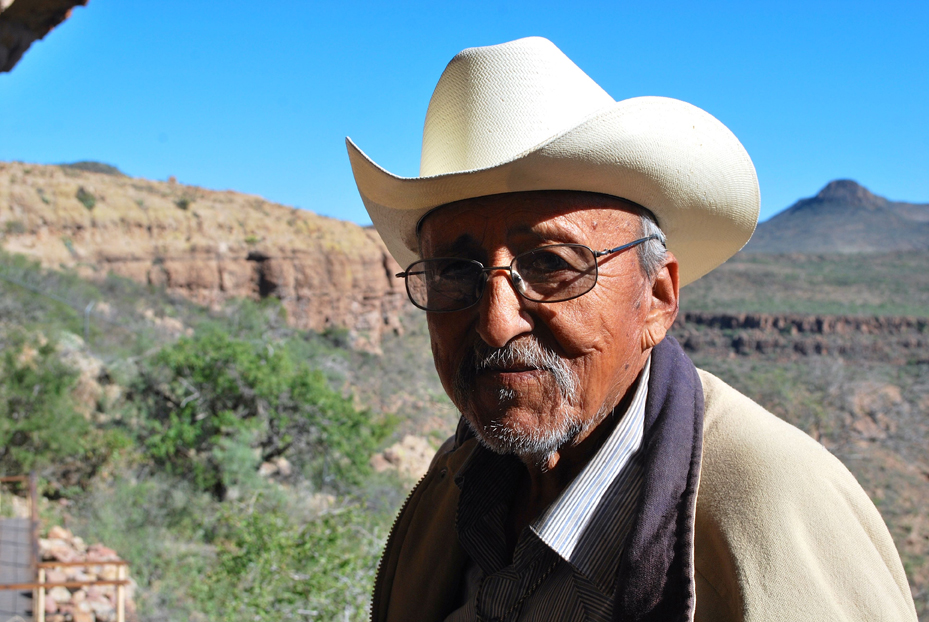 My next foray to the mural paintings was to Cueva del Ratón in the Sierra de San Francisco with Manuel from Los Petates. This cave had an added level of security, there was both a chain link fence topped with concertina wire and a local guide, Manuel’s tio Enrique. These paintings were larger and more elaborate, with two-tone people and easily recognizable pumas (although the puma was originally mistaken for a rat, hence the name Cueva del Ratón), bighorn sheep, turtles, and smaller human figures in funny headdresses. The trip to Sierra de San Francisco was spectacular in itself, but I learned that there are trips by foot, mule, or horse to the canyon floor which is filled with date palm oases and many murals. 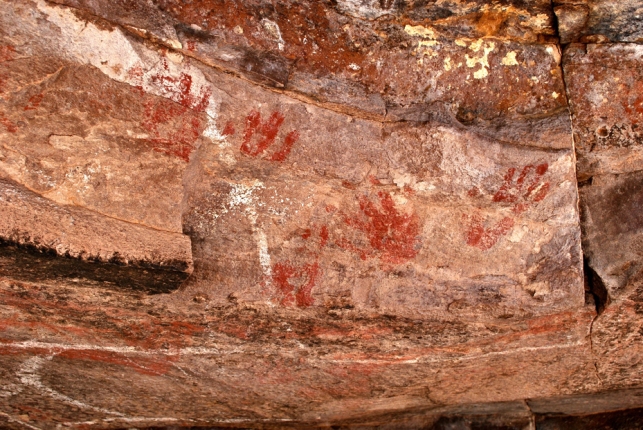 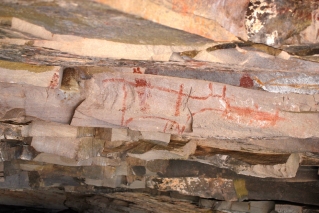 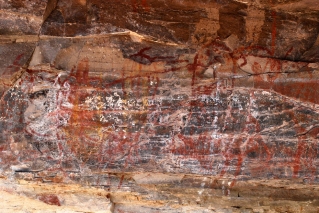 My final visit to a Cueva Pintada was during my overnight cowgirl adventure west of Mulegé. Apparently this one is no big deal. My guide settled down for a siesta on the bank of the creek, pointed up to a cave in the canyon wall, and told me it was easy to climb up and see the murals. In my opinion, the most interesting part of the painting were the handprints that looked like those of small children.

I’m thinking my next adventure will be a multi-day hike to the canyon floor to take in the palm oases and the cave paintings, and to be awestruck by the dizzying heights of the canyon walls above.