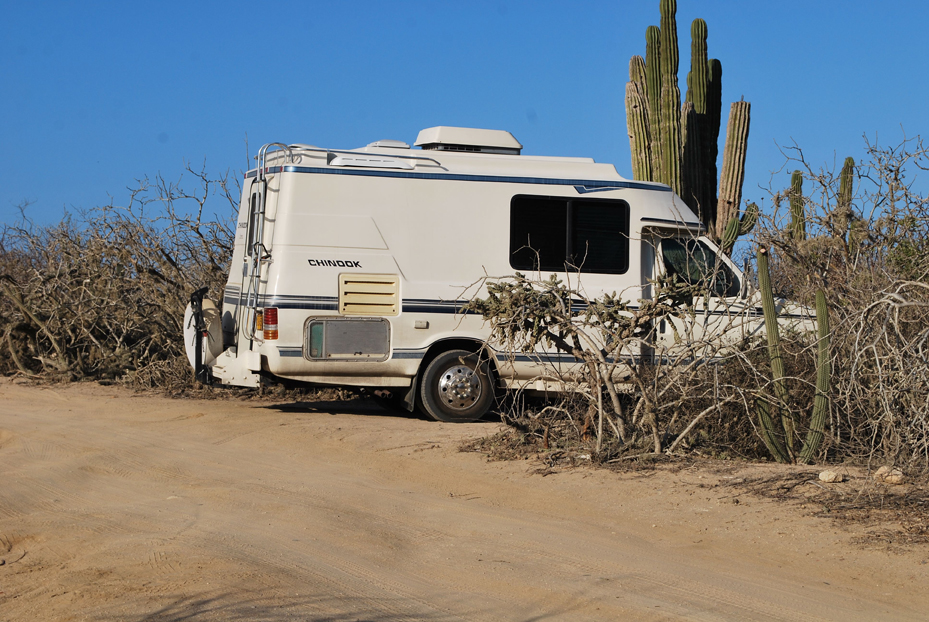 It was 5:00 p.m. on a beautiful Sunday afternoon. A new beach was calling my name, the beach and a cold beer. So I loaded up the dogs and headed down the hill to the market before making the trek to the beach. Everything was great, until it wasn’t.

I bought my beer, raised the passenger side blind on my caravan, climbed into the driver’s seat, put my rig in reverse, and backed out onto the main street in unison with an SUV full of shirtless Mexican boys a few spaces back. I don’t know, but if a big caravan with bells and whistles and back up beeps were backing out in front of me, I would keep a healthy distance between the two of us. The thought didn’t seem to occur to the SUV driver. I was blithely reversing when all of a sudden I saw an uproar of shirtless chests hanging out the windows of the SUV hollering at me in Spanish. I put my rig in drive and stepped on the gas.

I turned left at the next street and pulled to the side of the road so they could enlighten me on the situation. Apparently I bumped into them and left a scratch on their car door. I was ready to take full responsibility, but I really wasn’t sure what to do or say. I had no clue about how everything was going to go down. I admit, I was more than a bit nervous. There were four healthy young men, and they, like me, were just pulling out of the cerveceria.

First, I decided to play the dumb, monolingual, gringa card, and ask them in English, “what seems to be the problem?” That wasn’t getting me anywhere, so I climbed out of my caravan to survey the damage. I rubbed it with my finger, then I rubbed it with my skirt, then I unconsciously blurted out in my best street accent, “no es nada.” (It’s nothing.)

They weren’t really happy with my thoughts, so I asked them, “que quieres?” (What do you want?)

They were really looking baffled, and were at a loss for words, so I had to think fast. “Quieren cerveza?” (Do you guys want beer?)

That had them completely dumbstruck. I walked to my caravan, thanking my lucky stars that I had bought the entire six-pack and not just the one beer that I really wanted. (All you feminists might want to avert your eyes for the next couple sentences, to avoid reading about the shameless act to follow). I happened to be wearing a short skirt, and thank my lucky stars, once again, I remembered to put on underwear before leaving the house. I stepped up on the running board, leaned over the driver’s seat, grabbed four bottles of beer, then returned to the SUV and handed one to each of the boys. To seal the deal, as I handed the beer to the driver, I looked deeply into his eyes and said, “gracias.” His mouth opened and closed a few times, like a fish out of water, then he put his car into gear and drove away.

I climbed back into my caravan and drove off to the beach, my heart still pounding, grateful that I had dodged a bullet that could have been very unpleasant.